This third-to-last week of work has flown by before I got to post about last weekend’s fun.  We saw Donna the Buffalo at the Jefferson in Charlottesville on Saturday. Met some friends from Roanoke for the show and also had dinner with long time friends who moved to C’ville many years ago.  We had dinner at the Commonwealth Skybar, which is an open air bar on the mall.  Thank goodness they close it off in the winter and have plenty of heaters.  So good to see everyone. 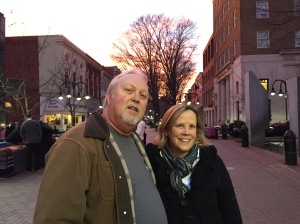 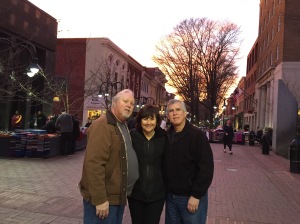 We walked around the mall which I found a bit creepy.  I thought a bit about the young murdered UVA student who was last seen on the mall alive.

The sunset was filled with color!  The contrast between the dark earthly objects and the sky struck a beautiful scene.

I don’t have a setlist for Donna though there were lots of new songs with old ones mixed in.  A group called Driftwood opened, new to me however our friends saw them at Floydfest.  Energetic female fiddler and the band also hails from NY State like Donna.  Best part was the encore with both Driftwood and Donna on the stage closing with a Gimme some loving’/Shout medley.  Not something I expected Jeb and Tara to bring out.  Jeb rocked it as always.  Lots of dancing feet!

Donna took the stage a little before 9:30 and then played until about midnight without a break. 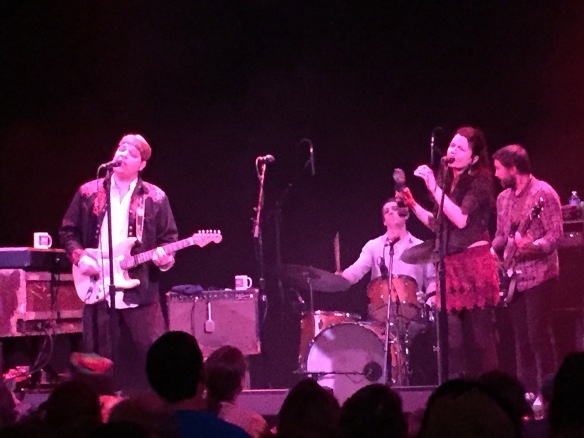 We rode the shuttle from the hotel to the Mall and then found a cab back to hotel–another late night!  And then we arose early on Sunday to beat feet back to DC so I could see Gigi at the Kennedy Center with some girlfriends.  I loved Gigi with Vanessa Hudgens from High School Musical (which I have not seen!).